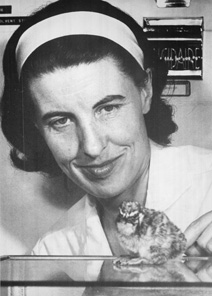 Ursula K. Abbott, after bravely fighting a battle with cancer, died at her Davis home on Sunday, January 15, 2012. Born July 20, 1927 in Chilliwack, British Columbia (BC), Canada, she was the only child of Ruth Agar and Gordon Knight.

Her lifelong fascination with poultry and their development began in grade school with a flock of standard bred chickens. Ursula graduated from the Duke of Connaught High School in New Westminster, BC in 1945. She received her B.S.A. in 1949 and M.S.A. in 1950 in Poultry and Genetics, both from the University of British Columbia, Vancouver. Her doctoral degree in Genetics was awarded by UC Berkeley in 1955.

Before she finished her Ph.D., Ursula was appointed a principal technician in the Department of Poultry Husbandry at Davis. With the doctoral work completed, her title was changed to instructor and she was then appointed as an assistant professor in 1957. She quickly rose through the professorial ranks and was named chair of the Department of Avian Sciences in 1981. During her tenure as chair, she was highly effective in advocating support for the department’s teaching and research programs. She developed undergraduate courses in developmental genetics and fertility and hatchability. Due to its rigor and the passion former students had for the course and the professor, Ursula’s graduate course in embryology and teratology took on legendary status.

Her research in the field of developmental genetics was a fusion of her two main interests: poultry breeding and embryology. She worked with many developmental mutations and became interested in pattern formation. She will forever be associated with her discovery of the scaleless mutation.

She served on many committees of the Academic Senate, including the Committee on Committees, Budget Committee which was the predecessor to the Committee on Academic Personnel, College Personnel, Privilege and Tenure, and Rules and Jurisdiction. She was very active in a number of professional societies and was instrumental in the Davis campus hosting two Poultry Science Association Meetings and the International Genetics Congress.

Over the course of her career she was awarded numerous honors. These included a Guggenheim Fellowship in Paris and Edinburgh, Program Director for Developmental Biology at the National Science Foundation (NSF) in Washington, DC, and grant review panel member for the NSF, USDA, and Howard Hughes Institute. She lectured around the world and was frequently called upon to help commercial poultry breeders and governmental agencies. She was proud of her efforts that enabled Nevada Fish and Game to establish the Snow Partridge in the Eastern Sierra. Following her retirement in 1992 as Professor emerita, the Ursula K. Abbott Symposium on Developmental Genetics was held at Davis in 2004.

Ursula maintained a second home in Vancouver and loved returning to her native Canada. She will be remembered by her family, friends, former students, and colleagues as a superb conversationalist, an astute business person, and a very independent and adventurous individual.