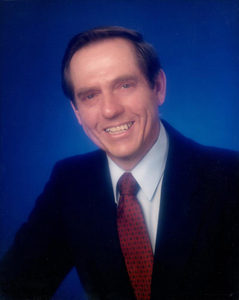 The field of animal science has lost a great mentor, colleague, and inspired thinker. William N. Garrett, professor emeritus of the Department of Animal Science at the University of California, Davis, passed away at the age of 90 on September 18, 2016, surrounded by his family. Garrett was a renowned ruminant nutritionist who, along with Glen Lofgreen, developed a system based on validated energy utilization of cattle, which ultimately impacted animal feed evaluation and ration formulation worldwide. He served on the faculty at UC Davis for 32 year during which he received many accolades for his research in nutrition and influenced the careers of many students. Garrett was a kind, modest, generous mentor with keen wit and intellect.

Garrett was born June 8, 1926, in Munster, PA, and graduated from Cresson High School. Immediately after high school in June 1944, he enlisted in the US Navy. After initial training, Garrett served on the USS Tarawa (CV-40), during her shakedown cruise to Guantanamo Bay, Cuba, and as a radioman/tailgunner in a TBM Avenger torpedo bomber. In 1946, he enrolled in the animal husbandry program at The Pennsylvania State University earning his B.S. in 1950 and his M.S. in 1951. Garrett then entered a nutrition doctoral program at UC Davis working with Glen P. Lofgreen and James H. Meyer, earning his Ph.D. in 1958. As a graduate student at UC Davis, Garrett began evaluating energy utilization in cattle and sheep, an area of study he would pursue for the rest of his career.

As a newly minted Ph.D., Garrett oversaw the cattle operations at the UC Imperial Valley Field Station (now renamed Desert Research and Extension Center) as an Assistant Animal Husbandman beginning in 1958 and extended his nutritional work to feedlot cattle. While stationed there, he also worked with USDA engineers on housing design to help keep cattle cooler in hot environments. In 1963, Garrett returned to the UC Davis campus integrating teaching into his research repertoire; by 1965, Associate Professor Garrett served as the instructor of “Feeds and Feeding,” “Type Evaluation in Livestock and Dairy Cattle,” “Meat Animal Production,” and “Nutritional Principles of Livestock Production.” Garrett and his UC Davis departmental colleague, Harold Cole, edited “Animal Agriculture: The Biology, Husbandry and Use of Domestic Animals” a popular textbook used in animal science courses. He served as major professor for 29 M.S. and seven Ph.D. students and helped develop the research and integrative thinking of undergraduates, offering them internships in his laboratory.

Garrett, and coworker Glen Lofgreen, are best known for the development of the California Net Energy System, which allowed for improved prediction of input:output relationships in growing and finishing beef cattle. Previously, estimates of energy exchanges in growing cattle employed short-term evaluations of heat production. The use of the comparative slaughter method by Garrett and Lofgreen measured changes in energy retention over the entire feeding period rather than short term calorimetry, thereby allowing for improved accuracy in describing feed energy utilization. The research team determined that energy efficiency for maintenance differed from that for growth, and Garrett devised predictive mathematical models to account for those differences. A particularly important characteristic of the new system was that partial efficiency of net energy utilization for growth was independent of the level of intake above maintenance. The significance of this work can be seen in the use of that system to this day, more than 50 years after its introduction to the cattle feeding industry. Garrett served on several National Academy of Sciences National Research Council Committees and was recognized by the ASAS for his work, receiving both the American Feed Manufacturer’s Award in 1975 and the Morrison Award in 1986.
In all things, be it research or service, Garrett led by example. He served on the ASAS Journal of Animal Science Editorial Board, Chaired the Ruminant Nutrition Program Committee, and served fi as secretary and then as President of the Western Section of ASAS, service recognized with the 1986 Distinguished Service Award. He was then elected President of the ASAS and served during 1983 to 1984. He stepped up during a period of flux and served as the Department of Animal Science Chair from 1987–1990, retiring from that position. In 2001 Garrett was honored as an ASAS Fellow.

Garrett was a devoted family man preceded in death by his beloved wife Ida; Ida and Bill were married in June 1954 and spent nearly 60 years together. Their two children, Joan and Karsen, reside in northern California. Garrett spent his retirement years fishing and enjoying the outdoors whenever he could. If one asked him how things were going and he answered “it is a good day”, you could be certain he had been fishing. He served as a mentor and colleague even in his retirement years. His approach to scientific questions was inspired and perceptive resulting in practical solutions and opened new avenues that form the foundation for subsequent generations. Together, the qualities that define Garrett are those that characterize an outstanding scientist, educator, leader, and person.