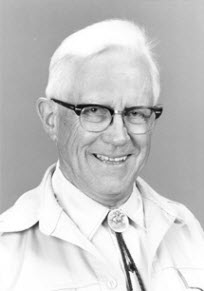 Bob Laben was born on a western New York dairy farm. He attended Alden High School, graduating in 1938 in a class of 29. He entered Cornell University that fall where he was active in the mandatory ROTC program.

In June 1942, Bob graduated from Cornell and was commissioned as a second lieutenant in the Army Field Artillery. His oversea service was in Britain and France where he was seriously wounded. He was sent back to the states for reconstructive surgery and applied for, and received, detached duty at Cornell, teaching survey and mapping courses and coaching the men’s and women’s rifle teams.

Because of his injuries, farming was no longer a viable option and Bob’s advisor at Cornell, Glenn Salisbury, recommended that he apply to graduate school in genetics and animal breeding. He accepted an assistantship at Oklahoma A & M at Stillwater. In the spring of 1946 he met Dorothy Lobb, a graduate student in human nutrition. They married in November, just after he began work on his Masters. They moved to the University of Missouri where Bob received his PhD in 1950 working on a genetic analysis of Holstein dairy cattle records.

An instructor position opened in the Department of Animal Husbandry at UC Davis; Bob was hired and taught his first course in the fall of 1950. Over the next 36 years, Bob taught such courses as Dairy Cattle Production, Lactation, and Animal Breeding while moving up the ranks to full professor. For 15 years he was Master Advisor in the department, receiving the College of Agriculture’s Undergraduate Student Advisor Award in 1973.

His own research focused on cattle breeding, including the effects of inbreeding on economically important traits in Jersey cows. He studied milk composition in an attempt to increase milk solids, especially protein. Then in the 1960s he was part of a team examining the impact of environmental DDT on the dairy industry and the food supply. Between 1965 and 1969, Dr. Laben served as director of the campus Computer Center. He was given an Award of Distinction in 2002 at the annual College of Agricultural and Environmental Sciences Celebration.

For over 40 years Bob served as a volunteer Hunter Safety instructor for the California Department of Fish and Game; he was named Instructor of the Year in 1995. In 1991 he was named Yolo Sportsman’s Association Sportsman of the Year. The Labens established an Educational Enhancement Fund for Animal Science undergraduates. Jim Meyer endowed the Robert and Dorothy Laben Scholarship within the Animal Science Department in their honor. In 2006 a student residence hall across from the Dairy Barn was named in Bob’s honor.