We have highly successful alums and we would like to highlight them with personal stories of how they got to where they are. Our undergraduate students may ask what they can do with their ANS degree and we want to highlight the diversity of career paths.

We are very interested to hear about your achievements, milestones, or recent activities to spotlight on our Success Stories page.  Please send information and photos to ansciweb@ucdavis.edu. 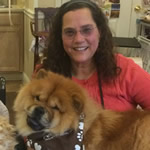 Carmen Jane Boot attended UC, Davis as an undergraduate from Fall of 1984 until June 1987, and then the School of Veterinary Medicine from Sept 1987 until June 1992.  Her journey began at March Air Force Base in Riverside California where she was born. Her father was in the Air Force. While he was stationed overseas and for a year after he was killed in Vietnam, her mother, sister and she lived on my grandparents’ dairy farm in Brawley, California. It was at the farm where she developed an interest in the herd health of cattle. Later they moved to Orange County. [more] 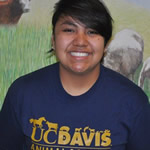 Lucydalila Cedillo, Animal Science Major, graduated in Spring 2016. She is the recipient of the 2016 University Medal. The University Medal recognizes a graduating senior for excellence in undergraduate studies, outstanding community service and the promise of future scholarship and contributions to society. She has accepted an offer of admission to Harvard University’s Biological and Biomedical Sciences Ph.D. program. [more] 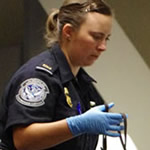 Tiffany Bennett, Animal Science and Management major, graduated In Spring 2014. She is currently working as a US Customs and Border Protection Agriculture Specialist K-9 at San Francisco International Airport. [more]